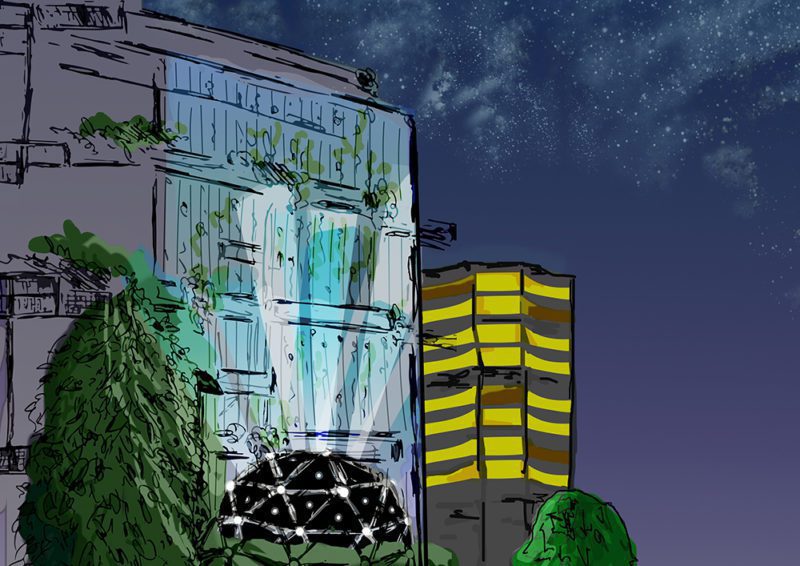 Posted at 11:03h in Blog, Gráfico-Audiovisual, Noticias by ESDI Admin

“Jardí del Sol” was a vertical garden that was always kept careful thanks to the energy of the sun’s rays. However, what happened when it gets dark? With the installation “Supernova”, when the sun went down between the buildings, a new star was reborn from the origins of the “Jardí del Sol” square, projecting its colored rays on the facade of the building and growing to the rhythm of the music until it meets with the universe.

At the foot of the facade of the “Jardí del Sol”, the Supernova installation stood. It was a geodesic dome covered by a fabric with small holes that let in light, creating rays that change intensity and color to the sound of music. The succession of colors is based on the life of a star, in this case the Sun. It begins with warm tones that gradually intensify until they reach an explosion that will turn it into a supernova, projecting more intensely different colors and recreating this explosion.

Finally, the colors would go out until they become only white light of less intensity that will represent a white lullaby. This sequence was reproduced in a loop representing the dependence that this vertical garden has on the sun; the source of energy that allows the garden to be watered daily with the rainwater accumulated in the tank at the base of the building.

“Supernova” was installed at C/Almogàvers, 195 (Jardí del Sol) during the Llum Bcn Poblenou festival, which took place from February 14 to 16, 2020.