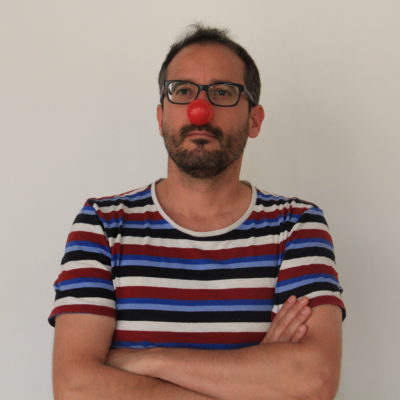 Antoni Mañach (Barcelona, ​​1973) has a degree in Philosophy from the University of Barcelona.

He obtained the Diploma of Advanced Studies (DEA) in the doctoral program of the UB Recerca en Disseny, with a study on the deontological codes of graphic design associations of ICOGRADA.

Currently, he is doing the Doctorate on ethics and design.

He obtained the Certificate of Pedagogical Aptitude (CAP) in the Institute of Education Sciences-ICE, of the University of Barcelona.

At ESDi, he is a professor of History and Theory of Design and Ethics of the profession. He is a member of the Trends and Innovation Unit of ESDi.

He has collaborated in research on trends in ESDi Color Lab and in the definition of the research lines that are carried out in ESDi.

He has researched the humanistic character of companies such as GALOPIN, making stays to observe how they work.

He is a member of the Grup de Recerca en Història de l’Art i del Disseny Contemporanis-GRACMON, where they investigate the productive sectors, the consumer and mediation systems of Barcelona.

He is a member of the History of Design Foundation-FHD.

He is a founding member, together with Professor Carlos Jiménez, of DESINGERS. A laboratory of pedagogical innovation where skills in design are acquired through the performing arts.

He worked as editor of the Associació magazine for the creation of the Col·legi de Dissenyadors Gràfics de Catalunya-CODIG.

He was editor and director of the magazine Cetrencada with Gerard Altaió.

He collaborated for three seasons in the morning program of Núria Riquelme in Ona Catalana.

He has taught philosophy classes to high school students and has participated in the assembly of various exhibitions.

He made the editorial coordination of the book about Amand Domènech, pioneer of advertising and graphic design in Barcelona.