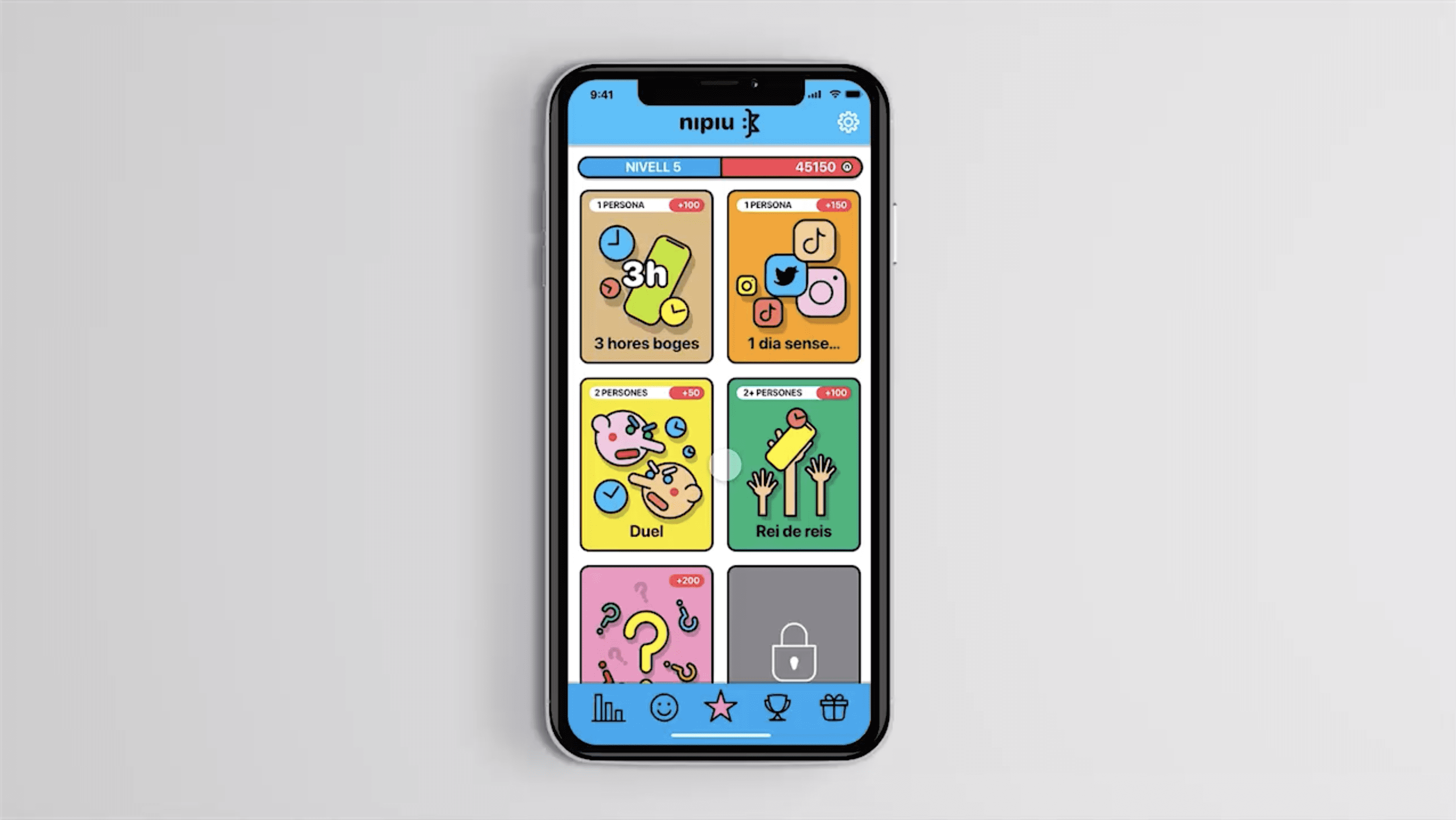 Posted at 11:49h in Blog, Noticias by ESDI Admin

Carles Cabezón, director of the Master in UI/UX Design, and Marianna de Nadal, head of the area of Visual Communication and Smart Design at the Higher School of Design ESDi and EATM by ESDi, have won the competition for Innovative Public Procurement of Citilab to support social and technological innovation initiatives that respond to a social problem or challenge. The social challenge they had to address with their proposal was to promote the proper use of mobile devices among young people, and so was born “Nipiu”, a gamified interactive application that aims to encourage young people to reduce the time of general use of both the mobile and the use of apps that generate more addiction. To make this change in their habits, the mobile app proposes a variety of simple games through which users, individually or challenging their contacts, have to overcome tests that inherently reduce the use of mobile devices.

“It has been a challenge to put ourselves inside the mind of generation Z to identify their frustrations regarding their excessive use of mobile phones,” says Carles Cabezón. “Working at the university has helped us, as we have had access to potential users of the app, who have tested the prototype and made suggestions, and have given us the necessary information to make an app according to their needs,” adds Marianna de Nadal. 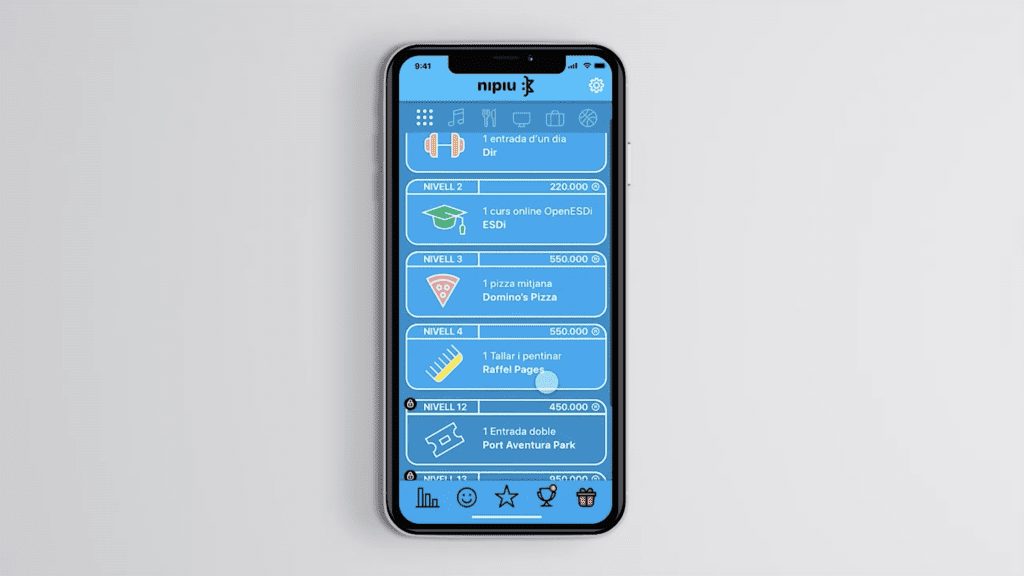 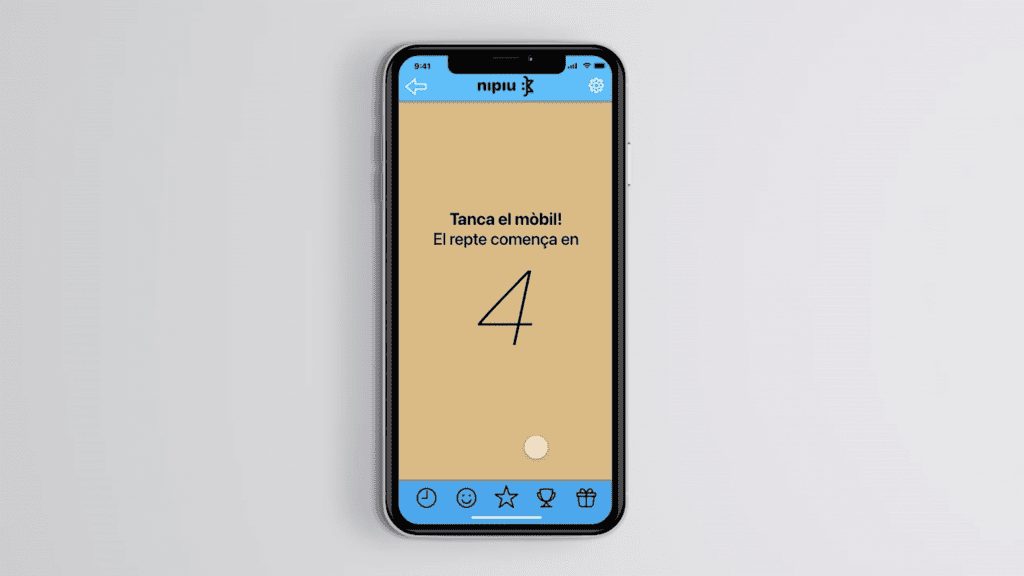 Having been selected by Citilab, the mobile app project “Nipiu” has been awarded funding of up to €7,400 to develop the first functional prototype of the proposal. “Once the results of the testing of our prototype have been obtained, we will make the necessary modifications to design a minimum viable product (MPV) programmed and ready to be published,” says Carles Cabezón.

The prototype proposes 5 games that are intended to get users into the daily habit of practising some form of mobile abstinence. These games or challenges are divided into three main types: individual, in pairs or in groups. As a reward for the winner(s) of the challenges, a certain amount of virtual coins will be provided that can be exchanged for “non-digital” products or services that promote mobile abstinence in young people’s free time. These rewards can range from cinema tickets to discounts on gyms, transport and travel.
The proposed games are: “3 crazy hours”, “1 day without…”, “Duel”, “King of kings” and “Surprise”. “3 crazy hours” is a countdown where the user will be able to see the notifications on the main screen when the mobile is locked, but will not be able to unlock it if he/she does not want to lose the challenge. At “1 day without…”, the user will choose the social network he/she wants to quarantine in this game. He/she will be able to see the notifications of the social network of his/her choice (if activated) on the main screen when the mobile phone is locked, and will be able to use the mobile phone at all times, but will not be able to open the app of the chosen social network if he/she does not want to lose the challenge. In “Duel”, the user will invite one of his contacts to a duel. Neither player will be aware of whether the other player has used their mobile phone before them in order to get both players to reach their personal endurance limits. In “King of kings”, the user will challenge up to 10 of his contacts to make as little use of the mobile phone as possible. None of the players will be aware of the evolution of the other players until the end of the challenge to get all of them to reach their personal stamina limits. At the end of the game, after 24h, the user who has made the most use of the mobile phone and who has therefore come last will lose a significant part of their virtual coins, which will be distributed proportionally to their position among the other players. Finally, the “Surprised” challenge will randomly select one of the other games. If the user does not accept the “Surprised” challenge, he/she will lose the nipius coins associated with it.
The idea of including these challenges in the Nipiu mobile app came from the high percentage of young people surveyed in the first phase of the project, who said they liked the idea of challenging each other and would be willing to play without using their mobile phones for certain periods of time. As they explained in the interviews, it would be an opportunity to be more present, have deeper relationships or even do more productive activities such as reading or learning new skills.

Having developed the prototype, the next step for Marianna and Carles is to launch the application. “The proposal made, with the support of Citilab, is an initial prototype, now we hope to find the necessary funding to be able to programme it and launch it on the market. We would like to see it finished and for young people to really use it to incorporate new healthy habits related to non-digital leisure”, says Marianna de Nadal.