Let’s imagine the spaces of the future 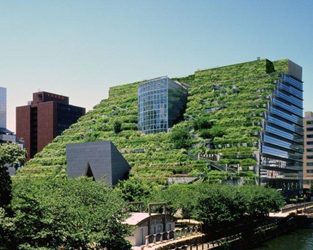 27 Jul Let’s imagine the spaces of the future

Posted at 12:33h in Blog, Noticias by ESDI Admin

‘I want the NextGenerationEU to kick-start a European renovation wave and make our Union a leader in the circular economy. But this is not just an environmental or economic project: it needs to be a new cultural project for Europe’
Ursula von der Leyen

How do we think the spaces we inhabit should be like? Should they be connected to natural environments? What features do we think the buildings and cities of the next century should have? Will we be able to design more sustainable and inclusive spaces? Will we opt for smart homes or, on the contrary, for less technological and more natural ones, in which we can create simpler ways of living?

These are some of the questions raised by the European Union in the call for reflection that represents the starting point of the New European Bauhaus project. The President herself, Ursula von der Leyen, is leading this project. It aims to invite as many groups as possible, creative or technical, experts and professionals or amateurs and students, to start a debate on how we should conceive the spaces of the future.

The European Union presents this interdisciplinary initiative as a space of encounter between the different European groups that propose ‘future ways of living, situated at the crossroad between art, culture, social inclusion, science and technology. It brings the Green Deal to our living places and calls for a collective effort to imagine and build a future that is sustainable, inclusive and beautiful for our minds and for our souls’.

From the ESDi School of Design, we have contributed to this EU request through collective reflection carried out in the classrooms. As a result, the 2nd year students of the Degree in Design have engaged in different debates on the issues raised by the Project. They have developed several proposals that have then been submitted to the organizers of the New European Bauhaus. The discussion began with the master class given by Marc de Rooij, PhD in Architecture, partner of BRTArquitecten, a Dutch architectural firm interested in the social aspect of this discipline and its impact on people and the natural environment.

Our School’s humanist vocation, as well as our commitment to social and cultural analysis, has led our students to focus on the relationship between people and their environment, and how they, as designers, can help to facilitate this interaction. From this perspective, Marc de Rooij presented the students with concepts such as neuroarquitecture, Biophilic Design, Nature inclusive architecture or Genius loci (the spirit of a place, which refers to the characteristic or distinctive aspects of a given space). All these trends are based on the interaction between the space and the user as a key element in the design of buildings and places. Some of them also address the need to reconnect humans with nature.

After the master class, the students were divided into groups of two or three to carry out an empirical analysis on the relationship between social needs and the design of future spaces. Each group had to identify a problem, explore possible solutions and explain them on the basis of an already existing building or space that they considered a point of reference. They had to identify the key concepts based on this reflection, which gave us a glimpse of how they conceived the spaces of the future.

A total of 25 proposals emerged from these groups of students. Among them, we noticed that the greatest concern of our students dealt with the integration of nature in the cities in which they lived. They also mentioned, however, how to move our homes to more natural spaces where the integration between architecture and the environment was the key. According to our students, this combination must be in line with environmental preservation criteria. 13 out of the 25 groups worked in this direction, placing special emphasis on the deteriorating situation of the planet, and how architecture and design could help to mitigate it. At the same time, the situation caused by the Pandemic made them reflect on the human need to connect more with nature and inhabit more open spaces.

Concepts such as ecosystem, integration, respect, mimesis, harmony, wellbeing, and also sustainability, self-sufficiency, autonomous systems, among others, kept appearing. The examples to illustrate these concepts focus on approaches such as vertical densification or green roofs, and architectural projects that integrate vegetation, such as the Acros Fukuoka prefectural international hall by Emilio Ambasz, one of the first buildings in the word to propose gardens on the façade. Another example is the vertical forest by Boeri Studio, or the Shopping Mall Vallco in Cupertino, which has a large green roof designed by Rafael Viñoly. The students also suggested constructions that brought nature into their interiors, such as the Biological Institutes of Dresden University of Technology, the Renaissance Barcelona Fira Hotel or the Nautilus House. The latter is a biophilic design that conceives the entire interior of the house as a part of nature itself.

On the other hand, some of these groups suggested designs in which the structures of the buildings blurred or blended in with nature, such as the Nature Centre in Harskoven, Copenhague, or the Fallingwater by Frank Lloyd Wright. 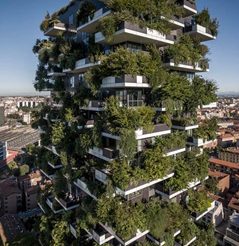 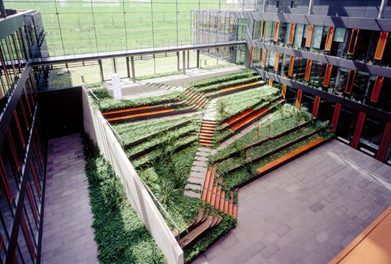 The second block of proposals, which accounted for 6 of the 25 sent to the New European Bauhaus, displayed our students’ interest in analysing the relationship between the design of the space and the impact on its inhabitants. In this regard, the students stressed the need for more interactive learning environments, in which people could feel that their relationship with other users, their creativity and their ability to concentrate were enhanced. The examples they worked on were the educational centres designed by Rosan Bosch, such as the Vittra Södermalm School. They also took into account other workspaces, such as the Google offices in Dublin.

The necessary interaction between the user and the space, in which comfort and serenity are key elements, led our students to propose the design of hospitals based on the methodology of neuroarchitecture. In this case, they used examples like the Nationwide Childrens Hospital, in Columbus, Ohio.

The students with a more commercial vision proposed the design of more innovative and surprising socialising experiences, such as the Sublimotion Restaurant, Hard Rock Hotel, in Ibiza. Here, users can have dinner in environments that recreate the atmosphere that best suits the food they have ordered. For instance, the restaurant becomes a submarine and the choice is fish.

Similarly, some students demanded the creation of spaces where collective experiences were encouraged, aimed at culture and art. This is the case of the Centre de Creació La Escocesa, in Barcelona. 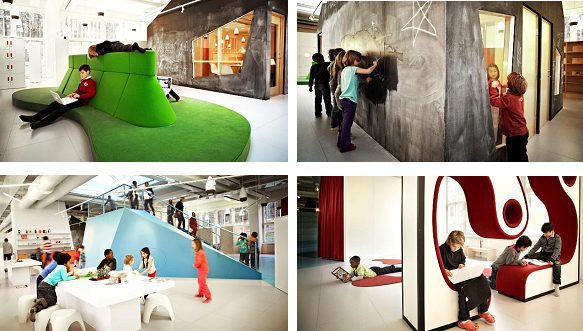 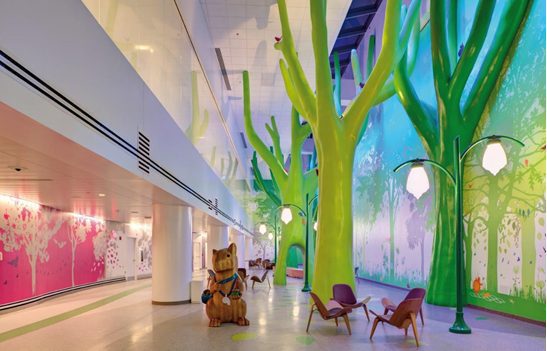 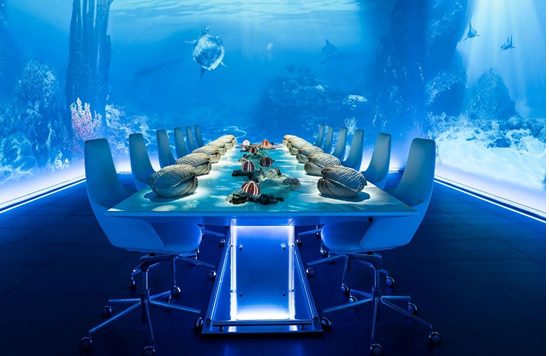 The remaining 6 proposals submitted by our students dealt with different issues, but all of them reflected on the Pandemic situation in which we are still immersed. In such special circumstances, people tend to rethink their way of life and the spaces they inhabit. This results in major paradigm shifts that interior design and architecture are no strangers to. In this sense, they propose the construction of dwellings that include global community spaces, not just family units, and allow the inhabitants to interact. Examples such as the High Line in New York or the High Loop in Shangai offer a different way of experiencing urban space and, at the same time, encourage physical activity, a healthy lifestyle and environmental sustainability. 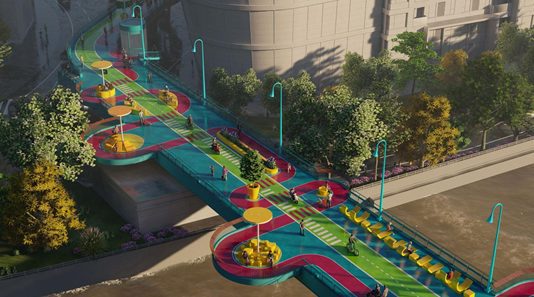 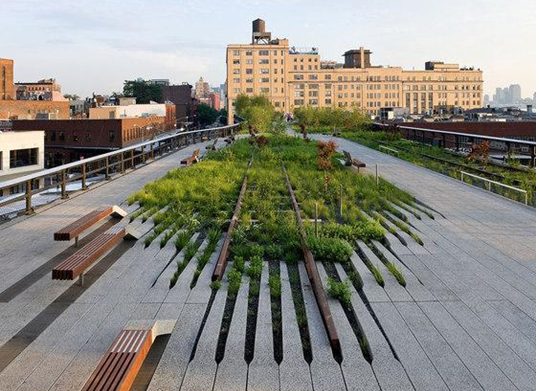 The discussion on how we imagine the spaces of the future with the 2nd year students of the Degree in Design was a challenge, given that the starting point was the analysis of our current ways of life. They are well aware that the existing social models are changing and that the Covid-19 crisis has accelerated the transformation that started at the beginning of the century. And they also assume that this situation will transform our individual and collective behaviour, which will also affect the spaces we inhabit and those in which our academic, professional, social and cultural activities take place. For this reason, ESDi students have agreed on the need to establish a more respectful approach to natural environments and to introduce them into the very heart of cit