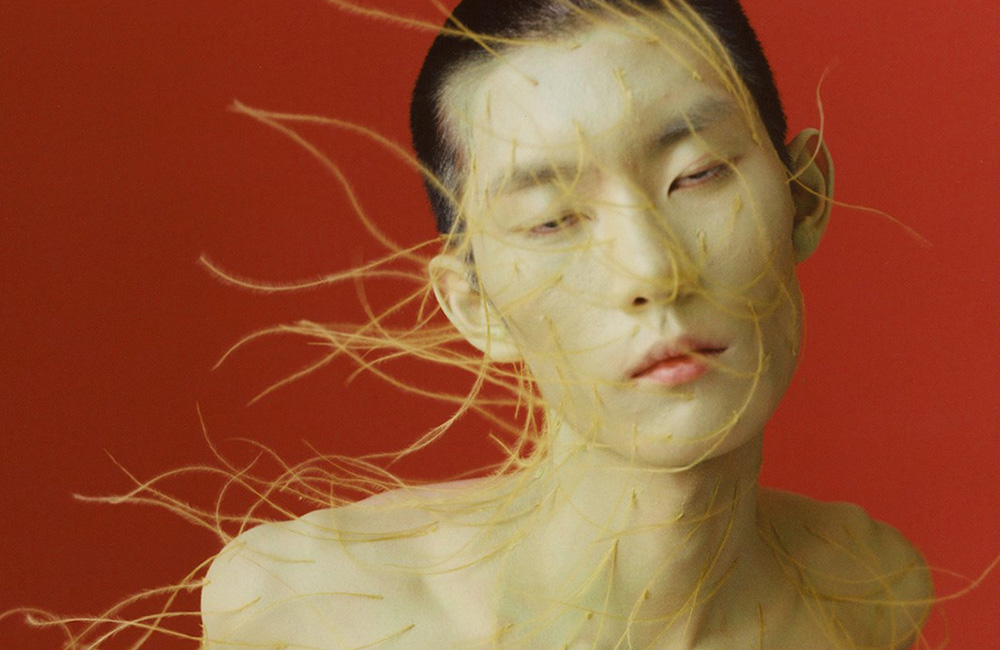 Posted at 15:40h in Blog, Noticias, Theory and development of design by ESDI Admin

From May 11th to the 13th, 2022, the Intercolor international colour congress will be held in Helsinki, where the colours that will be in trend for the coming spring/summer 2024 season will be decided. Each of the 17 participating countries will present a colour chart based on a sociological theme, and from these 17 proposals a single unified colour chart will be created and will have an impact on all areas of design for the next two seasons.

The proposal presented by Spain has been developed by ESDi Color Lab, ESDi’s colour trends laboratory, and produced with ConceptD computers, a partner of the Lab. For the SS24 season, ESDi Color Lab has taken the current period of social controversy as inspiration, using a series of chromatic ranges that represent it.

As explained by the Director of ESDi Color Lab, Dr. Encarna Ruiz, “the social controversy in which we find ourselves gives rise to the use of saturated colours, in which reddish, orangey and yellowish tones are predominant, making an allusion to this situation of collective difficulty. In times of crisis there is a predominance of intense colours, which are softened, on some occasions, with softer colours such as pinks, which are always reminiscent of people’s sensitivity. In our proposal these colours are present, but they are surrounded by maroons and dark browns that overshadow the innocent freshness of the pinks and provide a feeling of tension that evokes the current social reality. The general chart, conceptually, is built with materials made from the waste that comes from the everyday life of each and every one of us. This waste from our daily lives is a reflection of our unconscious presence and the impact we leave on the environment.

The choice of “controversy” as the main theme of this proposal it is the contradiction that occurs when people express an idea and act in a different way from what is stated. In contemporary times, it manifests itself when we voice our opposition to a reality marked by times of pandemics, war, inflation, and the emergence of extreme ideologies. A context that we do not confront because we hide in social networks, which generate an alternative space in which we locate our comfort zone. Endowed with the ability to hide, as if we were the god Proteus, we transform our identity, we pixelate the context that repulses us, and we generate junk content that induces us not to assume divergence.

It is from this idea of a world in constant controversy, in which the digital becomes our escape route, yet which directly confronts our need to make contact with tangible reality, that the reconstruction of our essence as individuals makes sense. For this reason, ESDi Color Lab’s colour chart is represented by four materials made from the debris of our routine: leftover food, press that speaks about extreme ideologies, coffee grounds or the remains of used plastics, which become new material possibilities. The controversy arises when the digital seduces us, when technology invades us, but we resist the idea of not establishing contact with what we are in an analogue and concrete form. Faced with immersive proposals, such as the metaverse, our residues bespeak our corporeal presence. 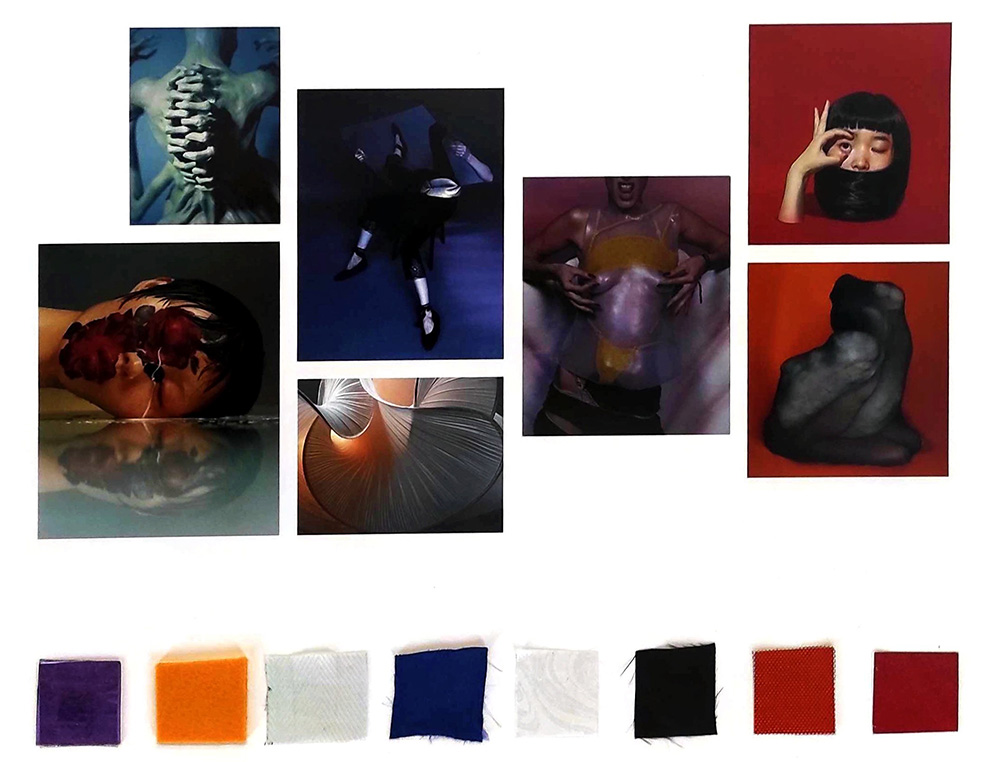 A phenomenon in which an individual’s behaviour within virtual worlds changes and adapts to the characteristics of their avatar. Outside the virtual world, the acquisition of this new behaviour can be prolonged and can transform the individual’s personality. The reality becomes conditioned by the immersive experience.

Proteus is represented through the cobalt blue colour, in which the superimposition of materials indicates this duality of personalities, in which the avatar is confused with the actor and vice versa. The plasticity of the materials, composite and shiny, induces us to envision a hyperreality that has a completely artificial and magical appearance. The yellow point of colour and the velvety texture tell us about the dynamism of a strange and dichotomous space that invites us to the tenebrous reflection on who is who. In this chromatic proposal all the colours, even black, are manipulated and the materials used are absolutely deceptive.

Pixelization is a technique of blurring all or parts of the message. Our society moves in the blurred. We pixelate reality. Censorship in its pure state, in which the tangible is shown as untouchable, things are transformed into ideas, the solid is inconsistent, and the desire to have replaces the possibility of possessing.

The chart focuses on the presence of soft pinks, in different shades, which lead us to consider the fantasy, the naivety of a community that seems to live on the fringes of events. On the other hand, these events are manipulated in order to present themselves as innocent and kind. These pinks are accompanied by two garnets: an intense one, that helps us to express the emotions of this inconsistent society; and a much paler one that places us in the blurriness of reality, which hides behind a bright midnight blue. The presence of the dark brown reminds us of the negative emotions that arise from this manipulation of the scenarios. 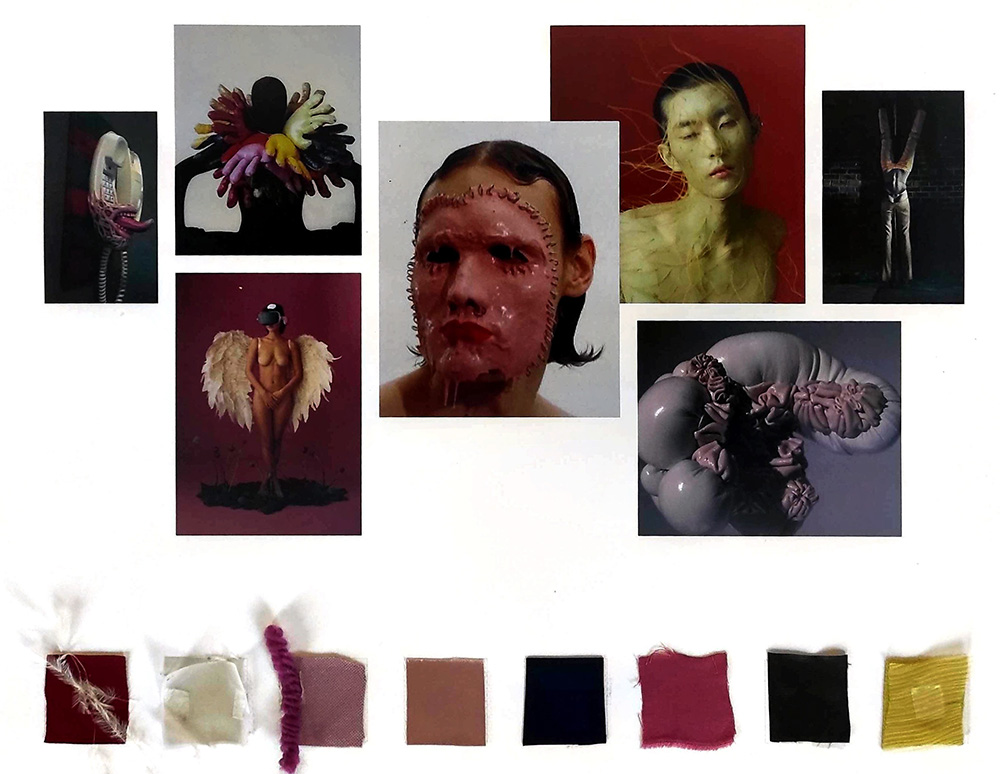 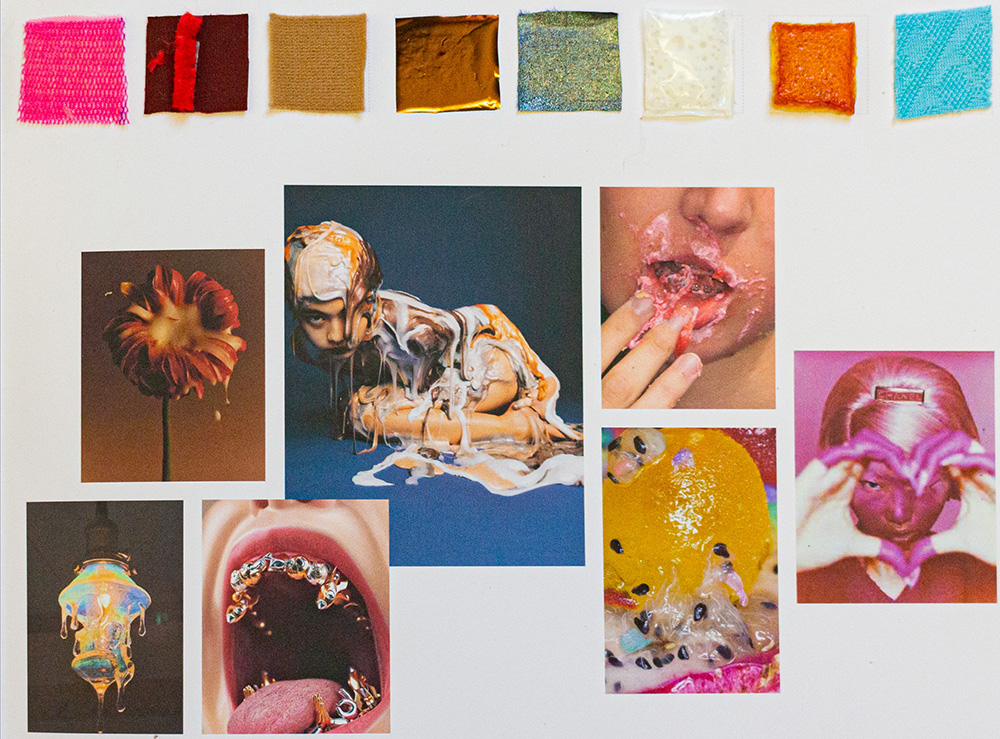 We evade reality by entering a world in which immediacy and nonsense prevail, full of unsubstantiated, unscrupulous content, capable of embarrassing us, of making us feel ashamed. It is a real de-virtualisation of our social scenarios in the face of which we are incapable of disagreeing. All of this trash brings us to the power of the social media to disseminate unscrupulous, unethical and sometimes illogical content.

That is why the chart kicks off with an artificial bubblegum pink tone, which tells us about the manipulation of positive emotions. The counterpoint of maroon tones contributes to this idea, leading us to the harmony of the contents, but containing a powerful red thread as a synonym of the violence of the current time in which we live. In this nuance lies the controversy. On the other hand, the brown that emulates the skin is the most human tone, the most direct, which blends in with
the elegant and shiny copper that endows this more natural condition of the artificiality provided by the contents of social media. Those unpleasant and murky messages are represented with a milky white, disdainful, and an almost rotten orange peel that gives us a feeling of corruption. However, all this negativity evaporates in the presence of a luminous light blue that provides serenity to this controversial proposal.